Hard cider may not be the only reason to stop by the Vander Mill Cider Mill and Winery’s tasting room, 14921 Cleveland St. in Spring Lake.

According to Chef Stephanie Luke, the mill has served doughnuts since it opened in 2006, but began serving meals last September. She described the menu items as “local craft food,” or familiar food items prepared in ways that make it “a little more interesting.”

The menu includes a mix of appetizers, salads and sandwiches. Luke said all the food was made from scratch and that most ingredients came from local farmers’ markets.

My boyfriend, Andrew, and I decided to stop by the mill and see what the food was about. We arrived at around 4 p.m. on Saturday, July 6, for an early dinner.

The tasting room itself isn’t huge. Inside, it seats about 65 people and has a warm wood interior with a few modern rustic touches.

Drinks were served in mason jars and the room’s pendant lighting used upside down vintage-looking metal buckets. Each table was decorated with fresh flowers that were placed in a vase made of out the 16-ounce cans that the mill recently began using to distribute its cider.

The eatery is also pretty casual. The menus were printed on sheets of paper. We placed our order at the front counter and grabbed a seat. There were about 10 other patrons in the room when we were there.

We decided to start off our dinner with a pork belly and corn cake appetizer, which cost $7 and included vinegar-braised pork belly, mango, fresh cucumber and sweet cornbread.

For dinner, Andrew went with the “Pitmaster P’s Pulled Pork” sandwich, which was made with roasted local pork shoulder, ancho chili barbecue, cabbage, tomato slices and a spicy garlic sauce on a house roll. He chose to pair it with a side of “Michigan Kettle Chips.” The sandwich cost $8.

I decided on the “No Harm No Fowl Veggie” sandwich, a vegetarian option that included garlic dill hummus, fresh cucumber, bell pepper, apple cider vinegar-dressed cabbage, tomato slices and an Asian aioli on a house-made roll. That sandwich cost $7.

It took about 20 minutes for all our food to arrive, but the kitchen didn’t seem very big and the group that had arrived ahead of us seemed to have a large order.

The food looked great on the plate – my cell phone photos didn’t do them justice – and we dug in as soon as I put my phone away.

Andrew said the “Pitmaster P’s Pulled Pork” wasn’t like a standard pulled pork sandwich. The meat wasn’t shredded, he said, and instead included chunks of pork. Also, he said, the flavor wasn’t smoky like a typical barbecue sauce, but more sweet and spicy.

However, those differences weren’t a turnoff.

He called the sauce “absolutely fantastic” and said he liked the pork they used. The tomato on top was a “nice touch.” Andrew was less enthusiastic about the chips, which tasted like regular potato chips, but he said he the sandwich was worth the visit.

I found the veggie sandwich refreshing. The vegetables were crisp and the sandwich overall tasted fresh and light, perfect on a warm summer day. My only complaint was that the aioli seeped through the bottom of the bun, making it soggy and a little messy to eat.

The coleslaw was also fantastic. It was a little different from most coleslaw I’ve had. There were no carrots in the mix and it was topped with what I later learned was roasted coconut and roasted almonds, although I swear I tasted some cinnamon in there.

Like the vegetables in the sandwich, the coleslaw’s cabbage gave a satisfying crunch and I really enjoyed the almond topping, even though the sweetness was unexpected. Andrew tried the coleslaw as well and said that of our two sides, mine was the better tasting one.

Overall, I found our meal satisfying. The portion sizes were just right and considering that so much of the food is made from scratch and local, I thought the prices were reasonable as well. The staff was polite and I found Vander Mill’s atmosphere relaxed and inviting.

The cider mill’s tasting room is open seven days a week and serves lunch and dinner. Luke said the menu changes seasonally and the café often has daily specials, depending on what’s available from farmers’ markets. Vander Mill also has a kids’ menu. 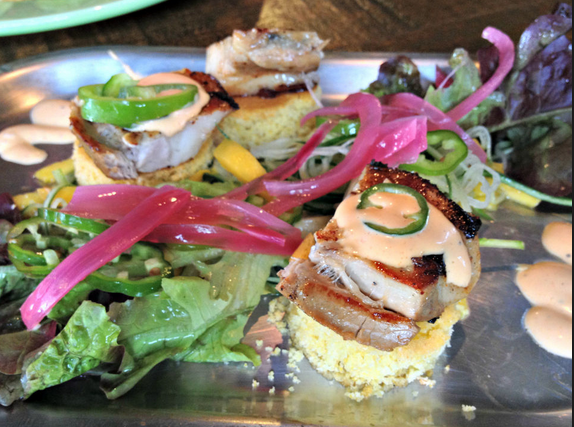